Spiti valley : Per Aspera Ad Astra- four words that aptly summarise our trip to Spiti Valley. It is a Latin phrase which means “through hardships to the stars.” To say that this region is surreal is stating the obvious, to say that reaching here is tough is in the genre of FYI, what needs stating is that it’s totally worth it. What adds to

the worth and what are the things to keep in mind while planning a trip to Spiti is the subject matter of this post.

To get a sense of the itinerary (especially when using public transport), the Devils on Wheels article on

How to make a budget trip to Spiti Valley is extremely helpful. Though the area defies a checklist approach, a sense of the places in store can be had from India Hikes’ article on Trekking in Spiti Valley. 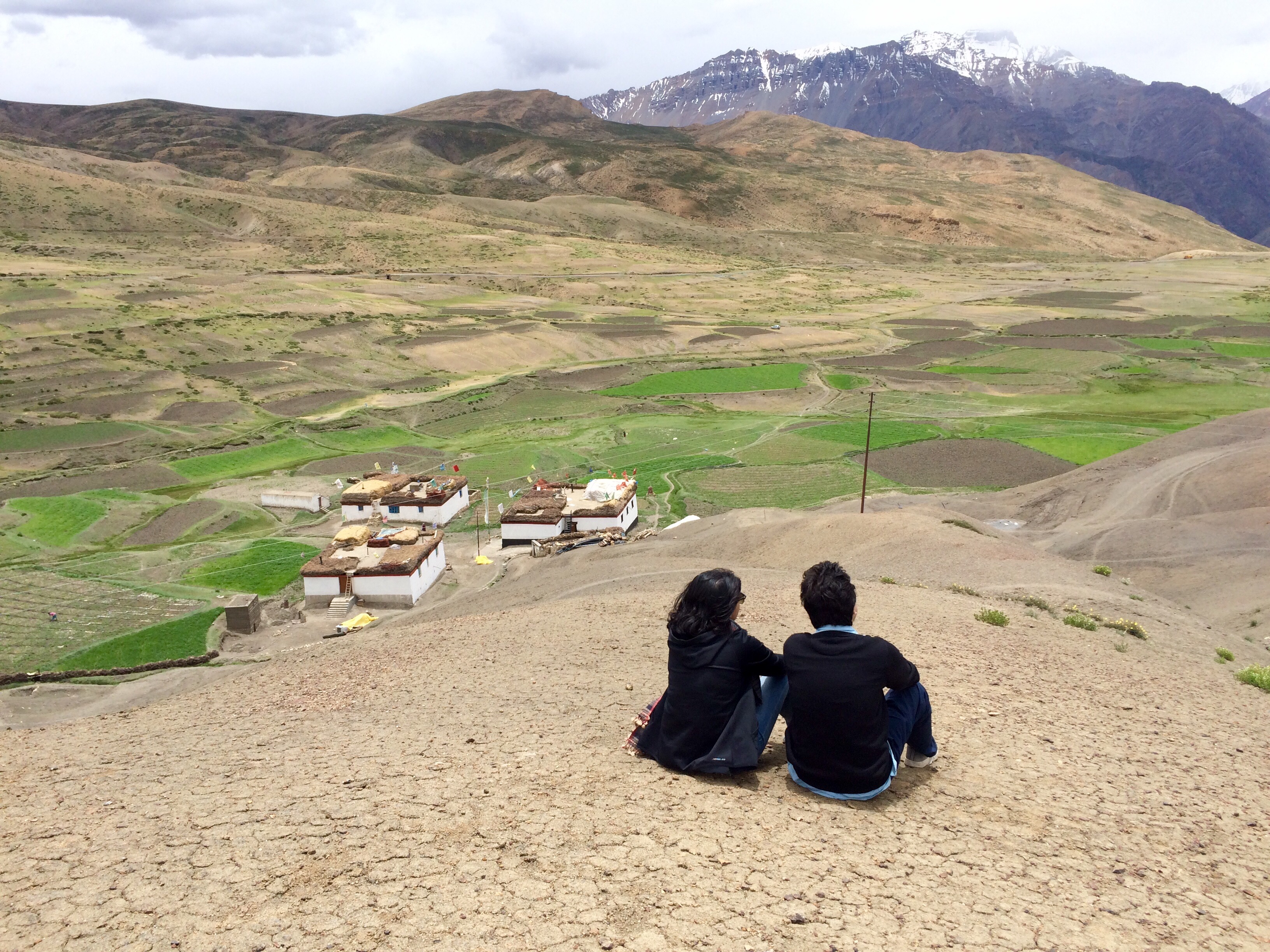 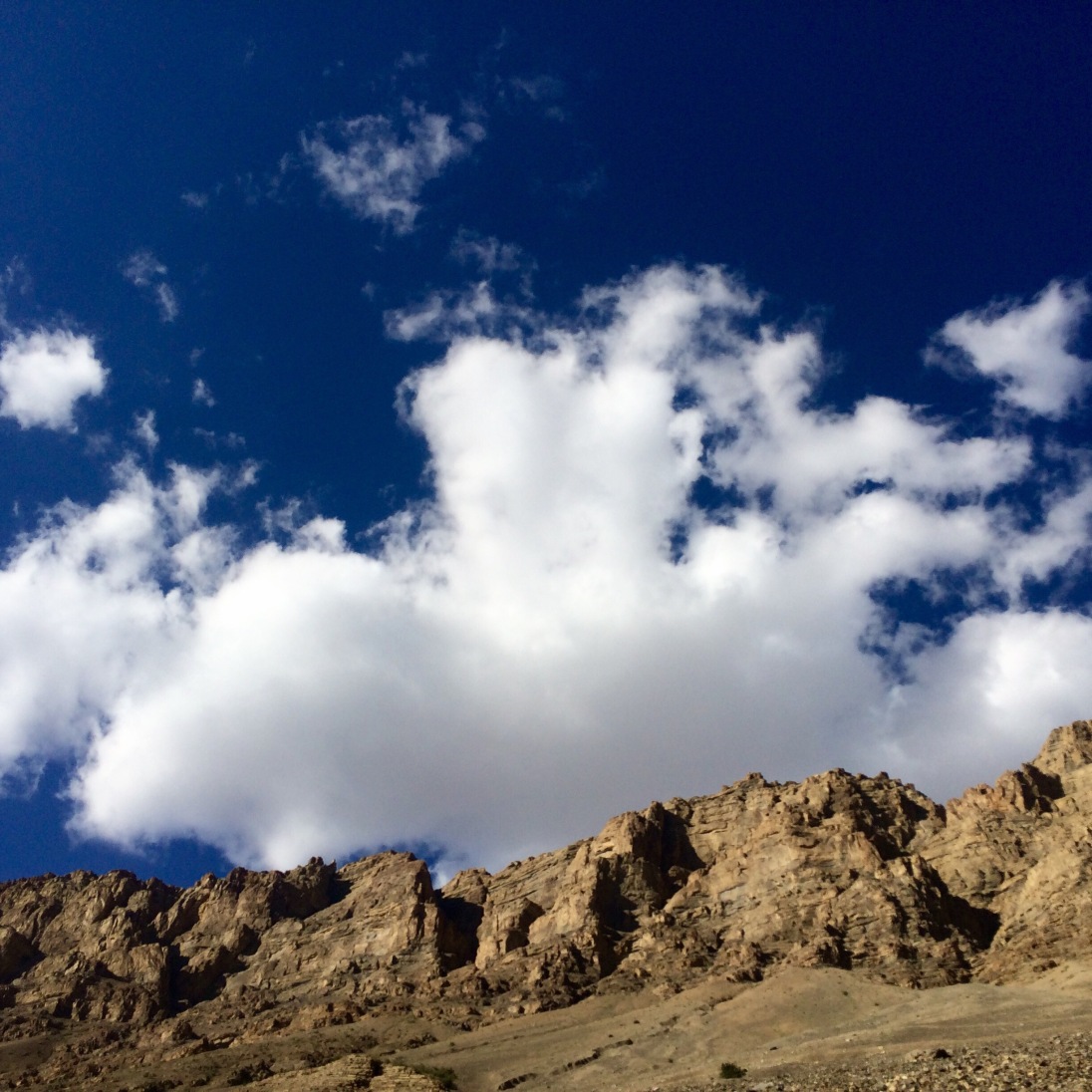 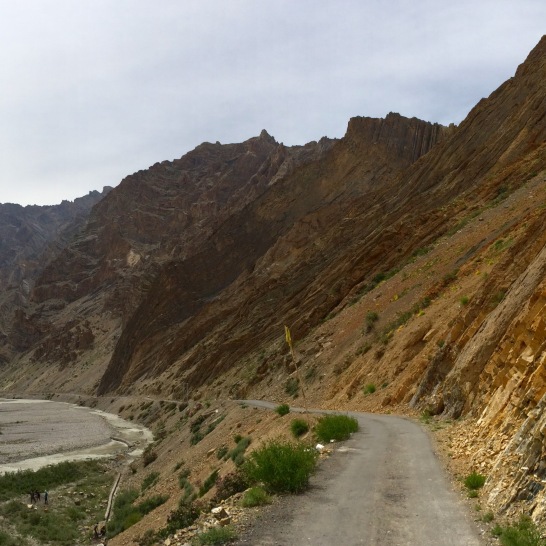 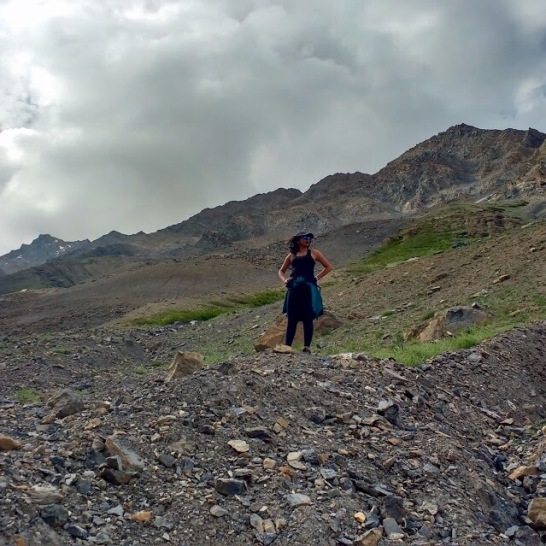 The Physical Features of Spiti Valley owe their existence to the unique geological history of the region.

Spiti’s environment must be understood in the context of its geological history.
The present location of Spiti was in pre-historic times the bed of the Tethys sea,
separating the Asian mainland from the Gondwara continent. As the latter moved towards the former, the tectonic plates rubbed against each other, and the movements of the earth’s crust pushed up the intermediate ground of the Tethys sea. Over time the sea dried up, the greater Himalyas rose to create the arid climate of today and Spiti’s landscape became a geologist’s paradise. Its exposed terrain, over altitudinal variations reflects chronologically distinct geological age from the pre-cambrian to the recent in pristine formations. The old sedimentary deposits forming the river valleys are easily erodable and the glacial movements of the Pleistocene era have left a deep impact. All major streams meander over wide beds of sand, gravel and stone leaving steep sided high terraces on one bank or the other, and rush through rocky gorges at the end of their course. 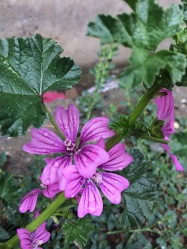 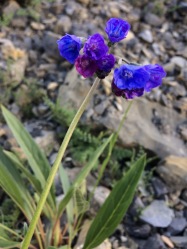 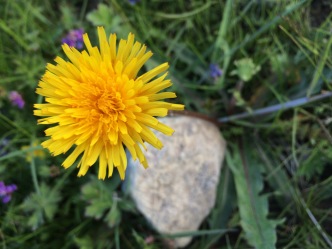 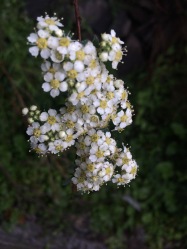 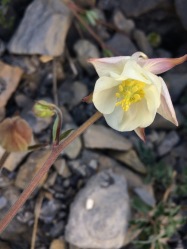 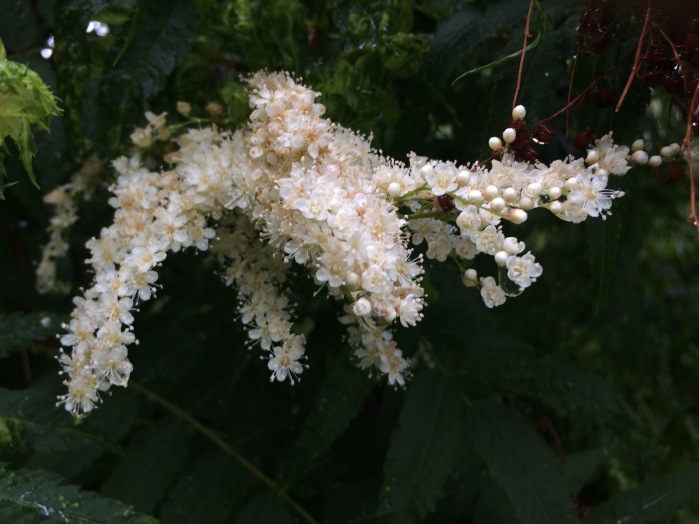 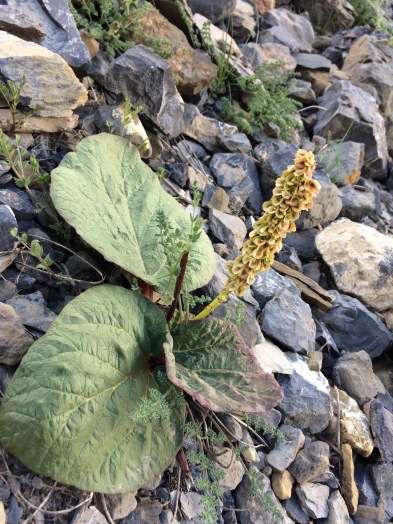 Roads being the only way to reach Spiti, the change in topography is evident as one moves towards Kaza. The trees are left behind, the meadows accompany for some distance, the rocky plains finally give way to the mighty barren snow-peaked mountains. The sound of prayer flags fluttering in the wind, the occasional chime of distant prayer bells and the wild roses scattered throughout the region welcome the traveler to Spiti. The valleys with fields of barley and peas and the wild flowers that add color to this picturesque land will uplift the mood of any nature lover. 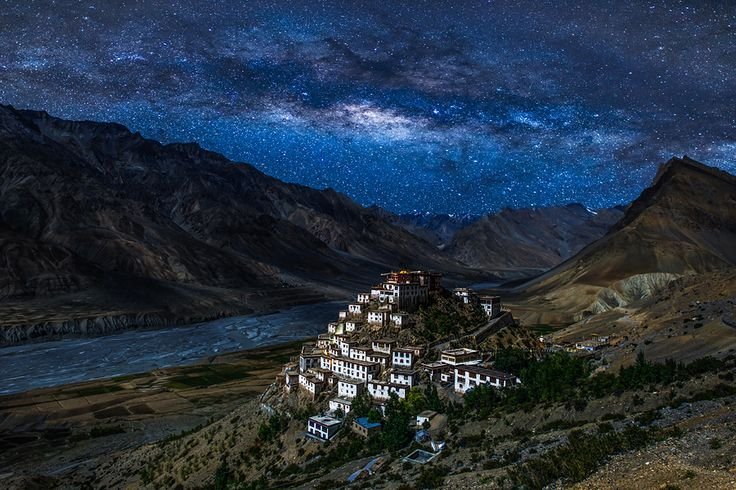 The night sky in Spiti is ethereal. A cloudless sky is what you have to pray for and the rest will be taken care of by the universe-its magnificent canvass laid out in all its glory in front of you. The Milky Way cluster and the shooting stars are an experience. For those wanting to capture their perfect star trail to those wanting

to lie down and stare at infinity, a cloudless night spent stargazing in Spiti is time well spent. I remember

the excitement with which I saw my first shooting star lying down on Zostel’s terrace in Kaza. At the end of three hours I had lost count. We happened to be in Kibber on the day of Id-ul-Fitr.  Seeing the beautiful crescent rise over the hills justified the fuss around Id ka chaand.

3. The People: Locals and Fellow Travelers 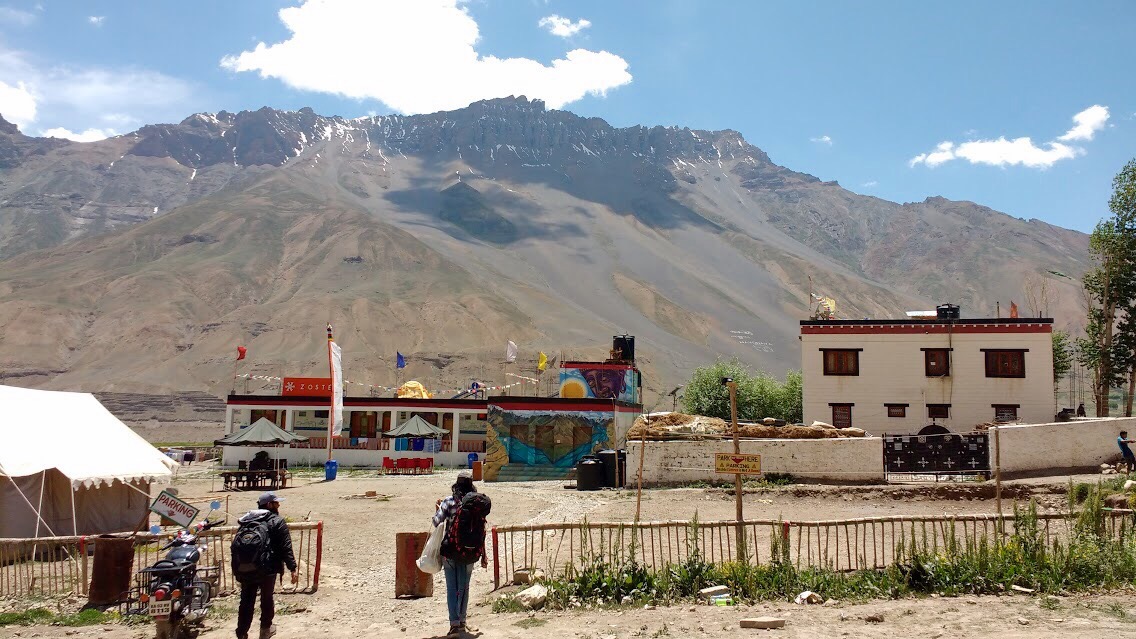 It’s not a stereotypical tourist destination but it’s definitely meant for the travelers. It’s for those who value the journey (significantly) more than the destination. It’s for the wanderers, the stargazers, the trekkers, people wanting to get away from the madding crowd (trivia: Lahaul and Spiti are second only to Dibang Valley, Arunachal Pradesh in the list of India’s least populated districts, as per Census 2011).

adds to the feel. The air in the cafes, the villages and the monasteries will carry the sounds of “Where are you coming from? Do you recommend Chandertal or should we rather do Pin Valley? How is the Manali route? What all have you guys covered?” The energy level of the place is exhilarating. Nothing dampens

the spirit. To give an example, while we were at Kaza, the fuel tankers could not reach Kaza from Shimla

as a result of which there was no diesel/petrol in the town. From bikers to regular tourists accepted this as a part of life and instead of becoming despondent revised plans to incorporate local treks/hikes. This

attitude is what makes this place special-Life keeps throwing lemons at you and you keep having it with ginger, honey and warm water to uplift yourself!

The locals will win your heart. Nobody is there to fleece you (like in other tourist destinations). Taxi rates

are written on the stand in Kaza, Himachal Pradesh Road Transport Corporation buses expect you to sit according to your seat number and when your plans are washed away by the many forces of nature, the locals will help you re-plan. Home-stays and the Himachal Pradesh Road Transport Corporation (HRTC) buses give you a chance to interact with them and observe them (the latter is highly recommended).

Seeing India Post sacks exchanging hands along the way, people waving and running towards the bus

from across the river, the conductor trying to get his way, the HRTC bus is a microcosm of humanity as it should have been (bonus is the kick-ass manoeuvres on the treacherous roads deftly managed by drivers straight out of The Fast and the Furious franchise)! 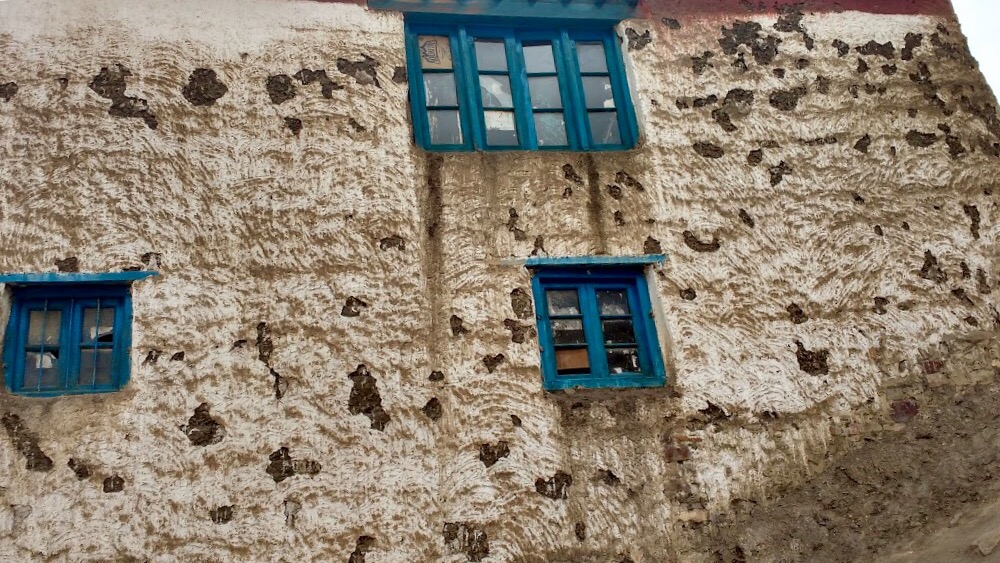 A standard Spiti Valley trip involves visiting and staying in the villages that dot this region. White-washed settlements built along the gradient are the symbols of human settlement. A stay at Mud Village and befriending a dog at a cafe made me realise that no houses were locked in Mud. I moved from one house to the other in the middle of the night, disturbing the cows in their slumber! Ram-rajya in the land of Buddha!

READ  Best Places To Visit In Shimla | The Queen of Hills

The villages are not just any run-of-the-mill villages. Each has its own trivia and hence a reason why you must mark your attendance there. For instance, there is a village en-route Mud the signboard for which proclaims that the population of the place is 31! 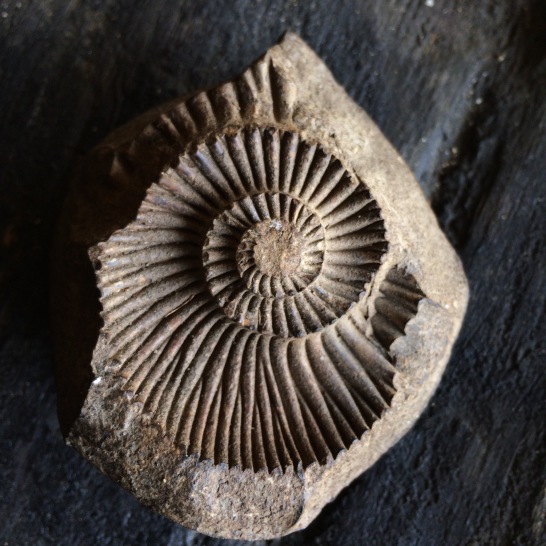 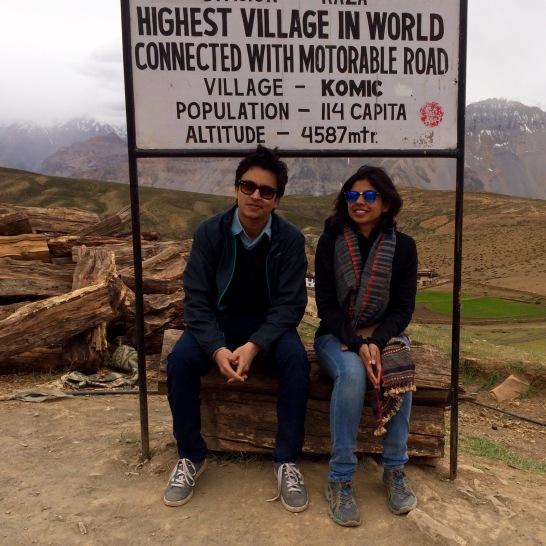 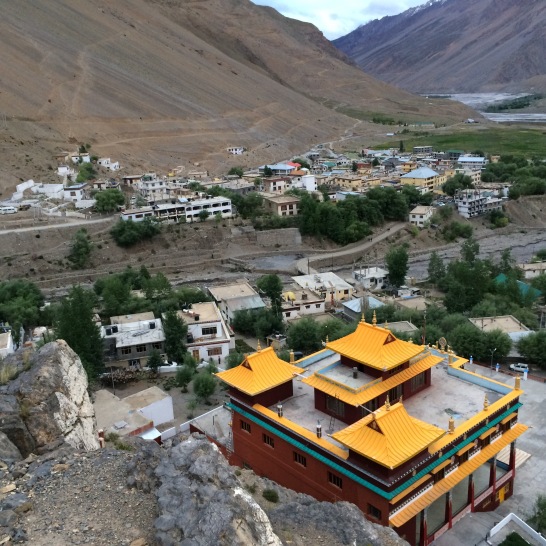 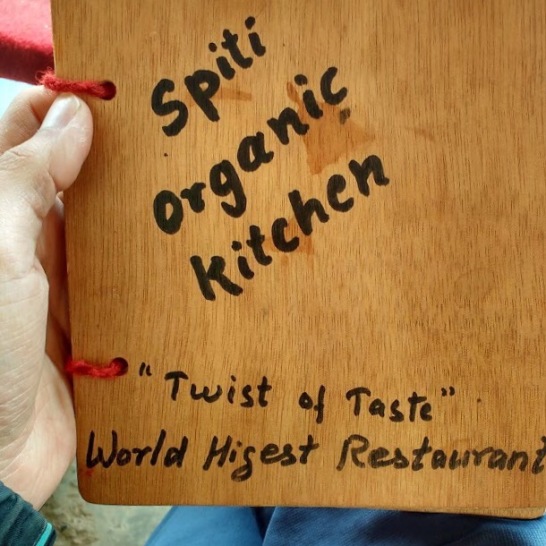 Komic claims to be the highest village in the world connected with a motorable road. As a consequence, everything from the post office (in Hikkim) to the restaurant around Komic are the highest in the world! Hikkim village boasts of having the world’s highest post office and is also the world’s highest polling station. The excitement of looking up pincodes and sending postcards from the highest post office in the world notwithstanding, the efficiency of India Post should be kept in mind. It is a much better idea to buy post cards from there and give them in person. (Needless to say that the ones we posted have not reached as yet, so much for nostalgia!). Behind Hikkim is Langza which boasts of innumerable fossils of sea creatures (the Tethys Sea connection) and plants to be found under rocks, or in the higher reaches of the mountains.  With vast undulating meadows and a large Buddha statue Langza is truly a place to keep calm and relax! Kibber, Dhankar, Tabo, Mud-the trivia continues… 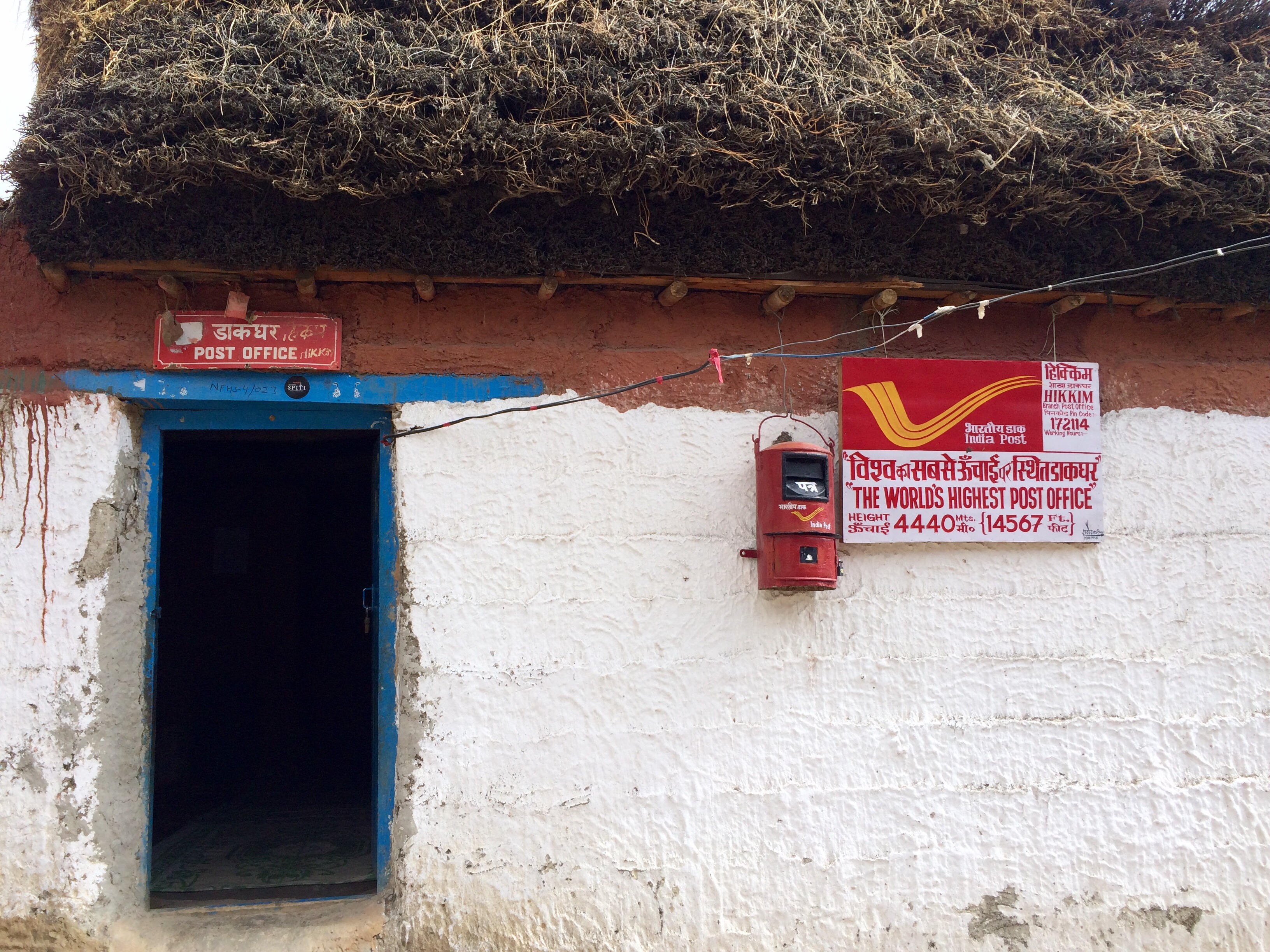 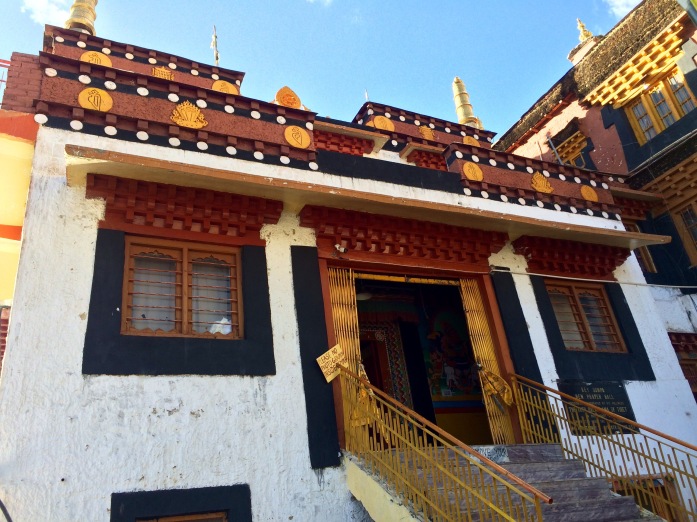 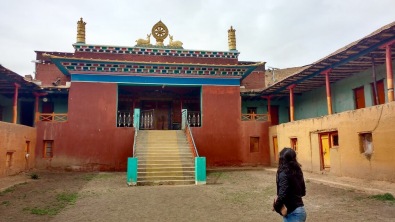 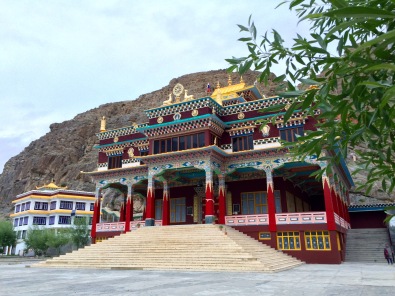 A visit to Spiti Valley is incomplete without stepping into atleast one of the many monasteries that are located in this region. Key Monastery with its formidable history and breathtaking views is just 15 kms from Kaza and en route to Kibber. With visitors grappling with altitude sickness, the herbal tea served at Key is quite a savior. The venerable Tabo Monastery is another must visit monastery (which sadly I could not!). Lhalung, Dhankar, Kungri Monastery or Tangyud Monastery (the list is definitely not exhaustive), take your pick and visit the one that fits in your itinerary, unless you are on a Buddhist trail and want to visit all.

1. It’s not an extended weekend trip with a checklist

Keep at least ten days (when starting from Delhi) when planning a Spiti trip. Even ten days will not suffice to do all that you wish to, but that is the bare minimum. Reaching Spiti will take at least two days (via Manali or via Shimla). Altitude sickness is a reality. As a result you should give yourself time to acclimatize. Once all this is dealt with you want to have at least five days to visit the different places and enjoy the feel of this sparsely populated, geologically rich region.

I cannot stress enough the importance of avoiding Manali while going or returning, especially the former. Agreed that it makes you reach faster but the cost is not worth paying. The roads are horrible (when they exist that is) and the ascent quite steep. Exertion and altitude sickness will be a reality. The only reason to head towards Manali is if Chandertal is on your itinerary and you are extremely short on time. If you are going to Kaza via Manali and planning to take the HRTC bus (reaches Manali bus stand around 5 a.m.), make sure you have bought your tickets from the bus counter the previous evening if you want a hassle free journey to Kaza. Seats in the bus are not on a first come first sit basis. Tickets are a must, unless you’re okay to give yourself up to the vagaries of fate. 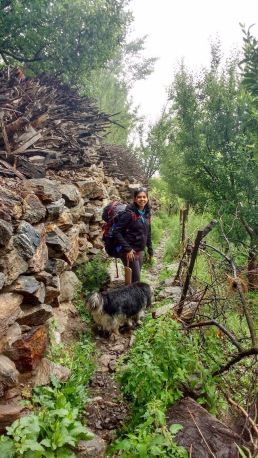 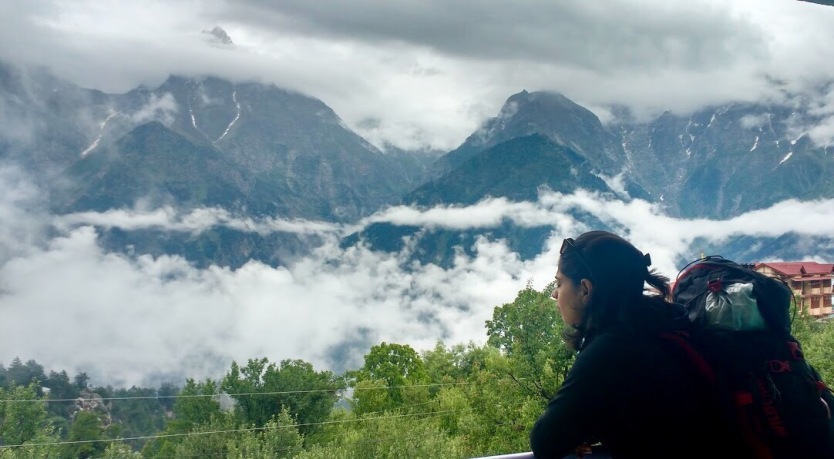 The Shimla route, though longer, has better roads and is more picturesque with the route passing through India’s apple country. It has stops like Reckong Peo and Nako , places that are definitely worth a visit. For instance, when halting at Reckong Peo, a visit to Kalpa is an absolute must, with its serene atmosphere and breathtaking views of Kinnaur Kailash. You will take 4-5 days to reach Kaza but the journey will not disappoint. The public transport options will have to be figured out as per the destinations on one’s itinerary.

4. Plans can be washed away @ Spiti valley

A major life lesson that stares you in the face in Spiti is that life happens while you’re busy planning. Before leaving the two things I really wanted to do was to camp at Chandertal and visit Tabo. That I did not do either is a reality I have to live with till I visit this place again. Similarly, we had plans of returning via Manali but the roads got washed away due to which no buses were going to Manali. Last minute plans were made of going back via Shimla, which was a blessing in disguise. The moral of the story: make plans but remember #ConditionsApply!

Don’t make your stay arrangements beforehand, except for the Zostel in Kaza and even there do a one night stay. At Kaza there are multiple stay options but Zostel is recommended for its location (located outside the market area, sort of at the end of Kaza, its apt for stargazing), for its hospitality and extremely cooperative staff that do their best to help you with your Spiti plans. After that you can leave for Key and then stay the night at Kibber in one of the home-stays. You could then head to Komic and Hikkim and stay the night there. HRTC buses to Kibber and Pin Valley leave Kaza in the evening. When heading to Pin Valley, Mud Village is where home-stays can be found. The charges for the home-stays are nominal (in Mud we paid Rs. 500 for a room for three people). Given that we found accommodation wherever we went in Spiti, without prior notice, on a weekend when entire Manali was sold out and we were forced to spend the night sitting/dozing on the rocks on the river bank in Manali means that when in Spiti you will find a roof.